The pound vs us dollar rate was left treading water on Friday after it was revealed UK consumer confidence remained at a six-year low in November. This meant the pair failed to add to the opinion poll inspired gains it had made earlier in the week. On Wednesday YouGov had released its much-anticipated MRP seat-by-seat prediction – a model that attempts to provide a more detailed projection than standard opinion polls, by using a much larger sample size – which indicated the Conservative party is on course to gain a comfortable majority. Opinion polls are typically treated with a pinch of salt these days, following a string of inaccurate forecasts – from the 2015 general election to the EU referendum – but this one has an element of credibility up its sleeve. That’s because back in 2017 it was the only one to accurately predict the outcome of the election.

Two live election debates over the weekend – one on Friday night and one last night – saw various representative from seven political parties exchange blows in the run-up to the 12 December vote – but not, crucially, Boris Johnson or Jeremy Corbyn. Once again, it was rhetoric around Brexit that pricked the ears of investors in the pound. Conservative panellist Rishi Sunak echoed Mr Johnson’s commitment to “get Brexit done”. While both Labour flag bearers were grilled about Jeremy Corbyn’s determination to remain neutral if his party were to force a second referendum with a new deal in place.

Lack of Data to Inspire the Dollar

The US dollar was left rudderless towards the end of last week due to a lack of data, with Thursday being the Thanksgiving banks holiday across the Atlantic. It found little support from US-China trade war developments, which pointed towards a deterioration in relations between the two superpowers after President Trump formally endorsed anti-government protestors in Hong Kong. The mounting tension suggests that Washington and Beijing are no closer to reaching a ‘phase one’ deal. While this has the potential to suppress the value of the dollar; conversely, it can also encourage demand for the safe-haven dollar.

The GBP vs USD rate could come under pressure on Tuesday if Markit’s UK manufacturing PMI shows the sector has fallen further into contraction than anticipated.
Equally, the pair could receive a boost today, if it’s revealed that the US ISM manufacturing PMI contracted for the fourth consecutive month in November. 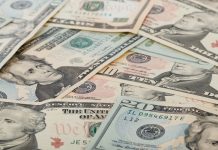