Christmas didn’t come early for the pound to US dollar rate after fears of a no-deal Brexit resurfaced at the start of the week. The change in mood was triggered by the government’s decision to make it illegal to request an extension to the transition period on a Brexit deal with the EU; a move that’s widely regarded as an attempt to force the EU into giving Mr Johnson a comprehensive free trade deal in 2020, by presenting the bloc with a new cliff-edge. This has raised serious questions around the UK’s future relationship with the EU if an agreement can’t be reached by the end of next year.

So, when the withdrawal agreement bill – into which the extension ban has been written – comfortably passed a second reading in the House of Commons last Friday, the pair began its downwards spiral below the 1.30 level.

Brexit developments weren’t the only ripples from the previous week being felt by the GBP to USD rate. Last Thursday’s interest rate announcement by the Bank of England (BoE) also gave the pair plenty of food for thought. The central bank warned of growing weakness in the domestic economy but chose to keep interest rates on hold. However, two members of its rate-setting Monetary Policy Committee once again voted for an immediate cut, raising speculation that the cost of borrowing could be reduced in the coming months. Then on Friday, the central bank revealed that Andrew Bailey – currently chief executive of the Financial Conduct Authority – is to replace outgoing BoE governor, Mark Carney. This generated further uncertainty about the future of UK interest rates, as we wait to gauge his stance on the issue.

The rollercoaster that is the US-China trade war continued to impact the dollar this week. One minute it was being boosted by lingering uncertainty that a phase one deal can be agreed anytime soon – a scenario that brings its safe haven status to the fore. The next minute optimism rose after Beijing announced it will lower tariffs on a range of goods as it seeks to boost imports.

UK data was on hold for the Christmas period. The economic calendar is up and running again on Monday, but we must wait until Thursday for any numbers of note when the Markit Manufacturing PMI is released. The pace picks up on Friday with a raft of figures, including Nationwide Housing Prices and Markit Construction PMI. Investors in the pound will be hoping for signs of economic health to soften the impact of the ongoing Brexit uncertainty. Political headlines are likely to remain thin on the ground, with Parliament’s Christmas recess not scheduled to end until 05 January.

It’s another busy week in the US economic data calendar:

Investors in the US dollar will also be monitoring the headlines for any fresh developments in US-China trade negotiations. 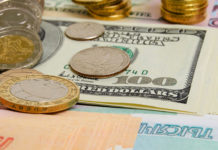