Having spent much of last week on a steady downhill course, the pound to dollar rate was on the road to recovery on Friday – before hitting a pothole. The pair started the week on the cusp of 1.37 – a benchmark it has struggled to breakthrough since 2018 – until the announcement of lockdown 3.0 sent it lower as economic uncertainty reared its ugly head once again. The pound’s mini end of week rally was inspired by vaccination optimism but was soon derailed by mounting anxiety about tighter economic restrictions and negative interest rate speculation – ending Friday comfortably below the 1.36 level against the dollar. By the time the clock struck midnight, the pound to dollar rate had sustained its first weekly decline since early December.

Despite feeling the pressure of draconian lockdown restrictions, the pound has an insurance policy: the vaccine rollout. On Thursday, Prime Minister Boris Johnson revealed that almost 1.5m people in Britain have already been vaccinated against COVID-19. The government also announced that negative tests will be made mandatory for travellers arriving in the UK.

However, this couldn’t prevent the pound vs dollar rate from retreating below the 1.35 level this morning for the first time since New Year’s Day.

Victory for the Democratic party in last week’s Senate run-offs – handing them control of both chambers of US Congress and the White House for the first time in 11 years – piled the pressure on an already weak dollar. The US currency’s losing streak stretches back to the start of the pandemic when the Federal Reserve took unprecedented actions to limit the economic chaos caused by the Covid-19 crisis. Growing expectations that the central bank could keep rates low for years have encouraged investors to look beyond the safe-haven dollar and explore riskier areas of the market – a trend that could accelerate in the short-term after the political shift in Washington handed President-elect Joe Biden more power to introduce a larger fiscal stimulus programme.

Job creation in the US skidded to a halt in December for the first time in eight months, as restrictions brought on by surging COVID-19 infection rates dented virus-sensitive industries, such as hospitality. On Friday, the Labor Department reported that nonfarm payrolls fell by 140,000 last month against the consensus estimate for a 50,000 gain. The unemployment rate held steady at 6.7%.

The cost of borrowing in the UK will be under the spotlight today when Bank of England (BoE) Monetary Policy Committee member Silvana Tenreyro leads an online discussion of “the international evidence of the transmission of negative interest rates”. This is followed by a speech by BoE Governor, Andrew Bailey. 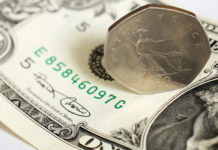