The pound was already under pressure before the Office for National Statistics released the latest Consumer Prices Index (CPI) yesterday morning. The inflation gauge slipped last month compared to January as rising petrol costs failed to offset discount clothing and footwear. The UK CPI rose 0.4% in the 12 months to February, down from a 0.7% rise the previous month. Looking further ahead, economists believe the headline rate of inflation will jump to within touching distance of the government’s 2% target by May, before climbing even higher towards the end of this year. However, these projections were of little use to GBP, with the pound to dollar rate falling to 1.36 for the first time in almost seven weeks – where it remained this morning.

The pound’s fall was broken by the flash IHS Markit/CIPS UK Composite Purchasing Managers’ Index (PMI), which rose above expectations of 51.1 to a seven-month high of 56.6 in March, from 49.6 in February – a reading above 50 signals expansion. The UK’s dominant services sector is demonstrating a strong recovery, rising to a seven-month high of 56.8 from 49.5 last month. A surge in new orders before lockdown restrictions are eased has triggered a stronger rebound for British companies than expected in March.

While UK business activity only began expanding this month, over in the US it continued its growth cycle, fuelled by service sector firms. However, input shortages – such as materials and PPE – and supplier delays stifled factory output, according to the flash PMI surveys from IHS Markit. The seasonally adjusted flash US composite PMI output index recorded 59.1 in March, down slightly from 59.5 in February – signalling the second-fastest private sector upturn for six years.

It was not all good news on the data front for the dollar yesterday. Orders for long-lasting manufactured goods – products designed to last at least three years, such as computers – dropped last month as supply chain challenges impacted factories. New orders for durable goods decreased 1.1% to a seasonally adjusted $254 billion last month, compared with January.

US Federal Reserve Chair Jerome Powell and Treasury Secretary Janet Yellen appeared virtually before a Senate Banking Committee yesterday, to discuss programmes to restore the economy – their second day of joint testimony. The nation’s top two economic policymakers struck a similar tone to Tuesday when they addressed the House Financial Services Committee: the economy is set for a strong recovery but the process of revitalising the jobs market will take time.

An empty UK economic diary today means the pound to dollar rate will take its cue from a slew of releases from the US economy, including the latest Gross Domestic Product figure.

Get in touch to discuss these factors in further detail and be kept up to date with the latest market movements. 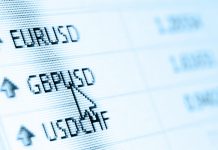